Bicycle advocates will be meeting in Manchester at the end of October.  RSVP to email below. 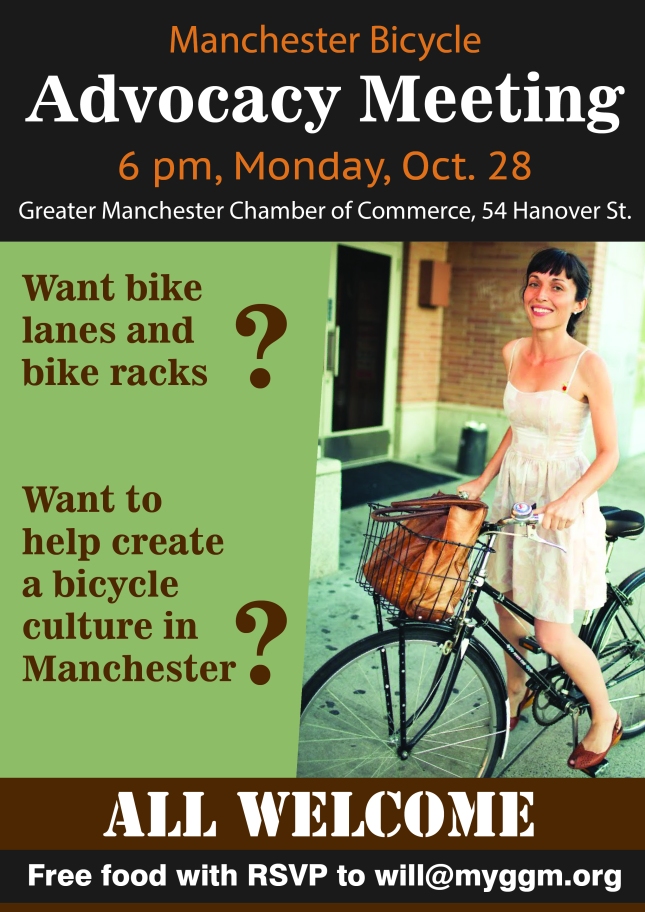 Today we have a guest post by Matt Waitkins.  His post is about a particular street in a particular town, but the lessons apply wherever you live.

The Town of Peterborough has a tremendous opportunity when Union Street is reconstructed next year. The reconstruction will extend from the intersection of Main, Union, Elm and High streets, past Adams Playground, and into West Peterborough. Union Street is becoming increasingly popular with pedestrians and bicyclists, both the young and not so young. The playing fields and beautiful new pool at Adams Playground are in demand and the nearby elementary school is part of the fabric of the neighborhood.

It’s almost natural for one’s car to pick up speed on the long, straight, wide open segment of the street east of the playground. The problem is this significantly diminishes the quality of life for pedestrians, bicyclists and people who live there. Enforcement of the speed limit is only one part of the solution and the police do the best they can in that regard. The configuration of the road is another part of the solution.

I believe that we can accommodate the interests of all transportation stakeholders with a creative redesign and reconstruction of Union Street. There isn’t space here to suggest many details but we should take a “complete streets” approach that will ensure the entire street is planned, designed, constructed and maintained to provide safe access for all users. This approach will help downtown Peterborough thrive by improving street connectivity and allowing everyone, whether on foot, bike, wheelchair or in a motor vehicle, to access the focal points of our community.

Town officials have already shown the creativity and foresight to obtain a planning grant from the N.H. Department of Transportation Safe Routes to School program that will be used to develop a conceptual design for the Main, Union, Elm and High Street intersection. This confusing, unattractive sea of asphalt is the gateway to the playground, pool and West Peterborough and desperately needs to be improved, both functionally and aesthetically. The reconstruction of Union Street is a once-in-a-generation opportunity to create a beautiful roadway that accommodates the whole menu of transportation options that are available to each of us. We need to think this through, be creative and come up with a great design, or we will have missed this opportunity. The goal of Peterborough’s transportation system should be to move people, not just motor vehicles.

Matt Waitkins has lived in Peterborough for many years and works as a transportation planner at a regional planning agency. He is also an alternate member of the Peterborough Zoning Board.